So, yesterday I asked you guys to embarrass yourself in the comments, and you did not disappoint.

One confession in particular really stuck out for me:

I realized that if I dinged someone’s car in the parking lot , I would not leave a note. If someone dinged my car and left a note, I would not accept any money. I’d be like pfff! You seen my clunker? Repair a scratch? Ha! I think that you should expect a perfect car when it’s new, and after that, dings and dents come with the territory. If I wouldn’t pay for a dent-repair on MY car, I’m not going to offer to pay for yours either.

At first I was all like, “Sheesh, that’s not very nice.”

Then I remembered something– when I was in high school I did this.

A group of friends and I were on our way to Six Flags, and we pulled into the bank parking lot to get some money from the ATM. We were being typical teenagers, and when I pulled out of the space–I backed right into the door of someone’s car. I should have left a note. 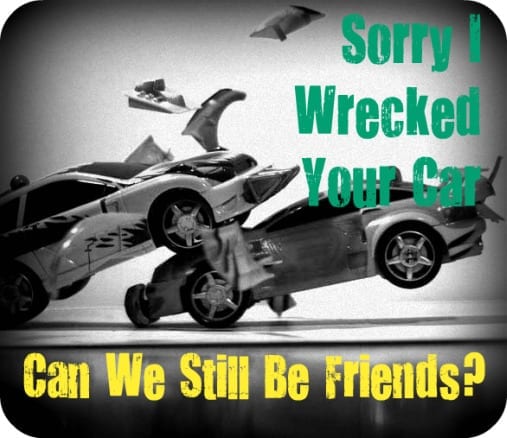 I should have called my mom. Isn’t that why she GAVE me a cell phone in the first place?

But I didn’t… I didn’t do any of this. Instead,  I listened to the cute boy sitting in the back seat of my Bronco. When he said, “DRIVE!” I did.Plus, I really wanted to go to Six Flags, because I knew when I got scared on the big roller coasters he would hold my hand…

The entire door of that car was all crushed in, and I just drove off and left it. We’re not talking a little baby ding here–we’re talking those people probably had to go get a new door for their car.

And it was my fault. Just writing this blog post I feel bad about it. I feel like I am going to get caught, too. I feel like the police have been looking for the girl who smashed in that door on that old beat up car for the last 15 years and now they are going to come to my house and take me away.

Now, that’s the kind of emotion I am scared to write about.

Those feelings, the way that made me feel that day to be such an asshole of a person. Now, when I think back–I can kind of rationalize it. You see, teenagers are impulsive and they do things without thinking… this was obviously one of those moments for me.

But let’s be clear here… I knew leaving was wrong, and I did it anyway because I didn’t want to face the consequences. The thing is–I didn’t have to, either.

Well, that’s not entirely true–I’ve spent the last fifteen years knowing I wrecked someone’s car and feeling like a jackass about it.

Wow, based on this comment trail, I'm going to avoid parking anywhere near teenagers for the rest of my life!

Thank you for sharing your confession though, Jamie. Don't you feel better now?

Oh, I also backed into Alex's car last year and scraped the hell out of the back fender. 2 foot long grey scratch. Kinda like it came back to haunt me. This one I did fess up to, but luckily, Alex doesn't care what his car looks like. Score!

I think what we've all learned here today is that there is apparently a good reason for car insurance to be more expensive for teens.

@Sally H, except that teens obviously don't use it...

I hit a giant steel tanker of a car in an apt. complex parking lot while driving my mom's little fiberglass Pontiac. I didn't want to confess to her at the time because I wanted to drive her car to a party later that night -- Soooo, genius struck! I picked up the pieces of her trunk and -- wait for it -- didn't throw them in the dumpster that was within spitting distance -- no -- I put them inside the freaking trunk! Um, yeah, she found them the next morning when she went grocery shopping, which totally blew my "OMG, I have no idea how your car got wrecked. Someone must have hit it in a parking lot" (which was kinda true) story. She let me tell my lie and then tossed the pieces of her car onto my bedroom carpet and told me that must have been the nicest hit and run driver EVER since he so kindly opened her trunk and left the pieces there. I still lose sleep over why I didn't just THROW THE PIECES OF THE TRUNK IN THE DUMPSTER! There was no need to leave a note for the other driver because it didn't even dent his late 60s cruise ship. .-= Shelli Cornelison´s last blog ..More Notes from Houston: Lisa Ann Sandell with Scholastic =-.

@Shelli Cornelison, my favorite part is that you aren't upset about lying to mom... but about getting caught!

It makes this story so much better :)

See? I'm not the only criminal.

As far as I know, I've never hit another car in the parking lot, certainly not enough to leave a noticable dent.

But you know what? If you care about your car, they do sell insurance that will cover stuff like this. .-= Kater´s last blog ..Smiley Ball 15 =-.

@Kater, And here you thought it was just you :)