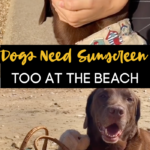 Similar to humans, did you know that your dog’s skin can burn from the sun?

Thanks to @good.boy.ollie who showed her social media followers what a doggy beach day looks like on TikTok, her video has since gone viral with over 2 million likes and nearly 17 thousand comments!

Aside from the digging in the sand and swimming in the water, we see the owner of Ollie putting sunscreen on and around his nose for protection against the sun in the very beginning of the video, followed by several shots of the handsome boy playing at the beach!

A popular comment that received more than a thousand likes mentioning they had no clue dogs needed sunscreen, was followed by a handful of other TikTok users who were also in agreement.

According to PetMD, a dog’s skin can be damaged without the proper application of sunscreen just like their owners.

“A dog’s skin can be damaged by the sun just like our own, so they require the same protection against the development of sunburn and skin cancer, said Richard Goldstein, DVM, and chief medical officer of the Animal Medical Center in New York City.”

Since we now know that the entire family, (including our pets) require sunscreen at the beach, you can even find sunscreen on Amazon that easily sprays onto your fur baby’s coat to keep them safe from the sun so they can have a ton of fun!