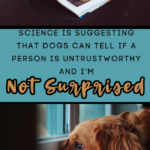 Man’s best friend. Beloved Pet. Emotional Support. That’s what I think of when I think of dogs.

I’m pretty partial to dogs. I have my own pup named Riley who has been with me for 11 years and I honestly don’t know what I would do without her.

But if you have ever been a dog owner, you’ve probably noticed that they can sometimes react negatively to a seemingly non-threatening person.

And research shows there may be a reason for it.

Dogs have been perceived to be able to pick up on human emotions.

Some research suggests that they can even smell fear. They also understand pointing.

So if you were to point at a toy, after time, they know to go get it.

A research lead by Akika Takaoka from the Kyoto University in Japan released the results of a study of 34 dogs that connected the two canine attributes of understanding pointing gestures as well as human expression.

The results pointed to an interesting conclusion: that dogs are able to identify when a pointing gesture is misleading.

They did a bunch of experiments, testing this theory by hiding treats under containers and sometimes not pointing them to the right one. They caught on quickly.

In the study, researchers wrote: These results suggest that not only dogs are highly skilled at understanding human pointing gestures, but also, they make inferences about the reliability of a human who presents cues and consequently modify their behavior flexibly depending on the inference.

Another study, published in 2017, found that dogs were able to tell if their human was being disrespected.

In the study, dog owners were prompted to ask strangers for help. The dogs reacted negatively to people who behaved disrespectfully to their human companions. They continued to express an aversion to the disrespectful subjects, even if provided treats.

All in all, I think it’s safe to say that our furry companions have our backs. They are a lot smarter than we give them credit for, and a great asset to any household. I, for one, never want to not have a dog.

1 shares
You Can Get A Wind Turbine To Power Your Home For Less Than The Cost Of An iPhone
← Previous
People Are Having A Hard Time Figuring Out The Answer To This Math Problem
Next →
Click here to cancel reply.