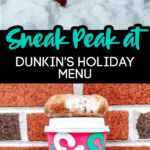 The constant tug of war between Dunkin’ and Starbucks increases during the holiday season and while we may not ever know which coffee chain has the best caffeinated drinks, Dunkin’s upcoming holiday puts up a good fight.

Several new items including both food and coffee drinks will soon be arriving at Dunkin’ shops.

Coffee sippers can expect Dunkin’ can expect a handful of new drinks to pump the veins with caffeine, three new snacks, and one new sprinkled topping for bakery section.

For our food groups, Dunkin’ will be releasing mini pancakes, a Chicken Bacon & Cheese Croissant, and finally a Cranberry Orange Muffin.

Meanwhile, Holly Berry Sprinkles are taking over donut holes at Dunkin’ and coffee enthusiasts can expect the new coffees and snacks to be released November 3rd while the sprinkles won’t release until the first day of December.

The limited-edition holiday items will begin at the beginning of November until January 4th, a few days after the new year.