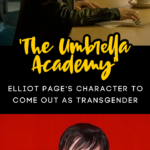 Elliot Page’s character in The Umbrella Academy is going to come out as transgender in the next season of the show.

I love Netflix’s The Umbrella Academy. It seems like we have been waiting FOREVER for the new season to drop.

It has, in fact, been 2 years since this quirky show has come out with a new episode. That’s the entire length of the quarantine, y’all!

A lot has changed since the last show of Season 2 aired. The biggest being that Elliot Page (formerly known as Ellen Page), who plays Vanya Hargreeves in the show, has come out as transgender.

This is going to be addressed in the show, as Vanya’s life will mirror that of Elliot Page — he will be a transgender person known as Viktor Hargreeves.

Page’s character is going to come out as part of the “normal” storyline, and won’t be tied into the multidimensional time travel universe of the show.

Once the news of the new story element dropped on Elliot Page’s Instagram account, the fans took to social media in support of the news.

as both an actor and an activist, @elliotpage’s impact on the culture cannot be understated. in 83 days, Elliot will return as Viktor Hargreeves in S3 of THE UMBRELLA ACADEMY. #TransDayofVisibility

A lot has change since then. Can’t wait to see Viktor Hargreaves in Season 3 of Umbrella Academy.

We can’t wait to see Viktor’s storyline when The Umbrella Academy drops on Netflix, June 22.