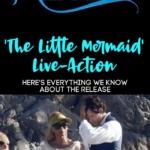 We’ve been patiently waiting for Disney’s new live-action release of ‘The Little Mermaid‘ and it’s getting closer!

The live-action ‘The Little Mermaid’ is directed by Rob Marshall, he’s known for films such as ‘Mary Poppins Returns’, ‘Into The Woods’, and ‘Pirates of the Caribbean: On Stranger Tides’.

The new live-action movie has an amazing all-star cast that includes one of my favorites, Melissa McCarthy as Ursula!

We’re ready for this, my kids are so excited, even though they are adults and teenagers now.

Currently, the film is in post-production with filming in London England.

We saw a lot of release dates change over the past two years due to Covid-19, as of right now this film has been given May 26, 2023, as a release date, however that could change.

Are you excited about this live-action remake of ‘The LIttle Mermaid’ and will you be watching it in theaters?

Waiting two years after filming to release it? I don't know much about movie makin but seems kind of bad.