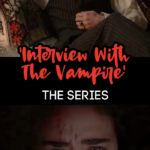 I have been waiting since 1994 for a sequel to Interview With A Vampire to drop.

Has there ever been anything more beautiful than Brad Pitt as a vampire? (The answer is no!)

I had pretty much resigned myself to the fact that it was never going to happen, but there’s no denying it’s coming out now!

The first full trailer of Interview With The Vampire has dropped, and I’m so stinkin’ excited.

This isn’t actually a sequel as much as it is a new reimagined adaptation of the book by Anne Rice.

Now, get this. This time, it’s not a movie. This adaptation of Interview With The Vampire is going to be a series released on AMC.

In 1973, a grieving mother and extraordinary writer began what would become the finest vampire novel ever written (all respects to Mr. Stoker). — Nearly 50 years later, we know what’s expected of us. We know how much this book and the ones that follow mean to their massive fan base. We feel you over our shoulders as we tend the Savage Garden. Louis and Lestat are coming out of hiding and we can’t wait to reunite them with you.

You can expect all the key players: Lestat, Louis, Claudia, and interviewer Daniel Molloy. But, they are (obviously) going to be played by all new actors.

Developing this series carries great pressure and responsibility. — What Anne Rice created and what her fans have been transfixed by forces us to take this book-to-television show transition with a great deal of responsibility. It is imperative that we do not disappoint her fans and yet we need to make sure that this story, these characters sing for a modern audience.

Interview With The Vampire, the series, is set to debut on AMC in October.

See the trailer for Interview With The Vampire below.