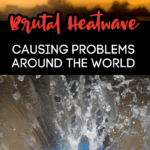 It’s freakin’ hot. And when I say it’s hot, I mean it’s like the 5th level of hell hot.

If you remember reading Dante in school, there are only 7 levels of hell. We are almost there. Wicked hot!

All this heat is not only harsh on us people that have to endure it, it’s becoming a problem for infrastructures around the world.

Check it out. It’s so hot that buildings, bridges, runways, and roads are freakin’ melting!

A Runway At London Luton Airport Was Melting In The Heat

Flights are temporarily suspended to allow for an essential runway repair after high surface temperatures caused a small section to lift.

According to Penn State College of Engineering, concrete will expand and contract with changes in temperature. In fact, MOST materials will expand when heated or contract when cooled.

This is the phenomenon that is making the runway buckle and bend in the heat.

Foil? I use foil to bake my food. Wouldn’t this make it hotter?

No. Actually, wrapping The Hammersmith Bridge in silver foil was a calculated move to reflect the heat off the bridge.

— Hammersmith & Fulham Council’s world leading engineers have installed a pioneering £420,000 (roughly $503,000 American) temperature control system to keep the bridge at a safe temperature and alleviate any stresses on the pedestals.

As you might imagine, the metal train rails get hella hot with the sun beating down on them all day.

In an attempt to keep the rails cooler, crews have been painting them white.

They are warning people to “travel only if absolutely necessary.”

A Museum’s Roof In China Melted From The Heat

In the city of Chongqing, the hellish temps led to the roof of the Forbidden City Cultural Relics Museum melting, this according to CNN.

The heat dissolved the underlying tar, causing the traditional Chinese tiles to pop off.

Pipes Are Bursting In Texas Because Of The Heat

My brother’s family lives in Texas, and he keeps texting me pictures of the ridiculous heat.

They are also under a drought, with no measurable rain in over 40 days!

The extreme heat and lack of rain dries out the ground to the point it shifts, causing main breaks.

City of Fort Worth news release

It’s so hot and dry there, they are having a rash of bursting pipes. That’s never good, AMIRITE?!?

City of Fort Worth news release

I know there are people who LOVE the summer heat, but I have never been more ready for fall weather in my life!!