My first job after college was a kindergarten teacher. I started in a district that had full day kindergarten, and they’d had it for a long time. There was an entire set of discipline procedures in place for misbehaving kindergarteners that was a little less strict and a little more forgiving than it was for older kids. I didn’t know any better, and in my book it was logical and fair.

A couple of years later, I went to a district that was switching form half day kindergarten to full day kindergarten. When I asked about discipline measures, and what we would do with kids that needed to be removed from the classroom, I was met with a lot of blank stares. 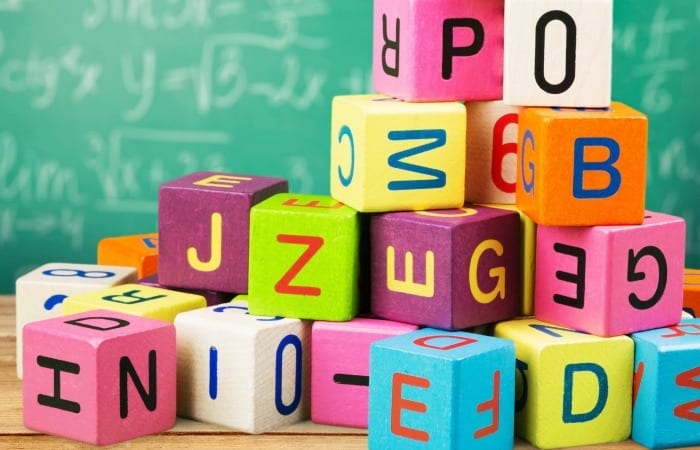 “We’ve never had to remove anyone from a classroom in kindergarten. That just isn’t something that happens,” said one teacher that was old enough she could have been my kindergarten teacher, so she totally knew what she was talking about.

I left it at that, not wanting to be the new girl rocking the boat or shaking things up. And we started school. Within the first week, there was an office full of kindergarteners. Kids who ran out doors and down hallways, kids who hit and fought, kids who missed their moms so much they were getting sick– an office full of kids who just couldn’t handle a full day of kindergarten.

In an emergency meeting the older teacher spoke, ” It’s like nothing I’ve ever seen. These kids are out of control. How are we ever supposed to teach like this?”

I was the only teacher in the room with full day kinder experience, so I answered, “The problems we are having aren’t unusual, this is something we have always experienced at the beginning of the year. We just can’t keep relying on the office. That isn’t really the answer, and they can’t watch a bunch of barely five-year-olds down there all day.”

“Wait, this is what happens every year in full day kindergarten?”

“Yes, we just handle it a little differently than this.” 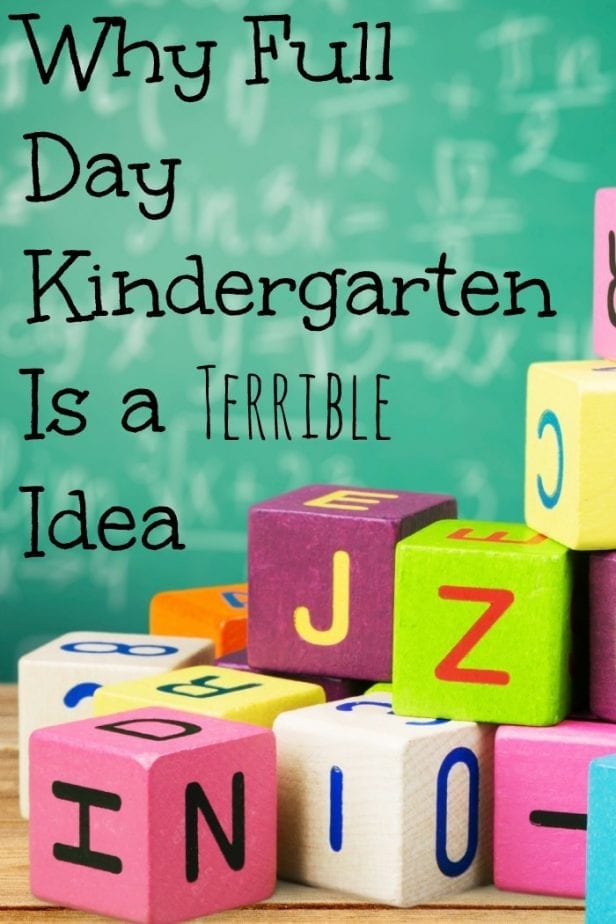 So, we implemented some of the plans from my old school. Sending kids to different classrooms for a change of scenery, having parents meet their kids at lunch if they need a little pick-me-up, making keychains for backpacks with pictures of pets and families from home for kids to look at and remember. We even had some kids bring security items from home. It worked out okay, but we still had problems. Problems that these teachers had NEVER in YEARS AND YEARS of teaching experienced when they taught half-day kindergarten.

And that’s when I realized what was happening, five years old is too young to spend an entire day in a kindergarten classroom. No matter what we did, no matter what kinds of plans we came up with, the school day was too long for these babies.

And that is why I think full day kindergarten is a terrible idea. We should let kids be KIDS for as long as we can. The sooner we toss them in a room, regulate their lives into daily school schedules and have them being taught all day, the faster we are asking them to grow up.

Bring back half day kindergarten. Please.

Couldn’t agree more. I’m a stay at home mom and it’s not I don’t have to work, we have to be VERY frugal in order to keep this luxury in place. I think it’s unfortunate that many times, this rigorous full day KG schedule is to a accommodate parents’ work schedules. Please give more options! Maybe some are, but my kids are not ready to start the M-F all day grind. And as much as the full day would provide freedom for me to actually get some things done..I don’t feel right about sending these kids out all day at the age of 5. It’s absurd.

Every time I hear parents use the "can't afford to stay home" line I don't know whether to laugh or roll my eyes. You all really think all us SAHM are rich and privileged don't you? Well, hey, my husband is turning wrenches right now, probably splattered in grease. He has no college degree but plenty of years experience, some trade school, and a reputation for being clever, responsible, and working like a beast of burden. His friendly personality helps. But rich? We haven't had a vacation since our honeymoon, 5 years ago. We had to go over a year with only one car - in a completely rural area - so I was marooned when weather didn't allow my husband to commute on his motorcycle, thus saving money on gas and being able to leave me the car. We can't renovate our kitchen. We just prioritize. Healthy eating of good food, me being home with the kids, are higher on our list of priorities. We also moved to a less expensive area further from the city, so we have a beautiful home and property for a fraction of the price. Husband's commute is longer, but these sacrifices made for quality of life. That's all. As such, I can cook good meals, grow much of our produce in my massive vegetable garden, take care of home, husband and kids, and our kids aren't always sick or bringing home bad behaviors from daycare. And my husband is no chauvenist, he's happy I'm home but would absolutely support my decision if I chose to work. He is helpful around the house even after a long day of work, with no asking or nagging on my part. And I am not a 50's throwback, before I married and became a mom, I owned my own little home, worked, started a business renting my own office space, and supported myself for many years as a single woman. It's all about priorities. Many of us SAHM find the money thing insulting. We are not all rich, none of the local SAHM are rich, in fact, their families earn less than mine does, they are blue collar, hardworking and simple people. PS, I'm an ex-city-slicker, so I'm not a rural chick by birth, either. Husband also grew up in the big city.

Reading this article I couldn't help but laugh and thought to myself "Are they throwing the children in at the deep end of the pool and expecting them to swim?". I work in a what you might call a Child Care Center (Private Day Nursery) in the UK, many of my students are with us longer hours than most of the staff (07:30 - 18:30) and yet we don't see a large amount of bad behaviour.

Here many children start school the term after their 3rd birthday in a Nursery class which is usually half-day [until about 20 years ago any school with a Nursery unit frequently admitted children full-time anytime from their 3rd birthday]. In the September following their 4th birthday, children enter full-time school in the reception class. Compulsory education if from the September following a child's 5th birthday. NB: Our academic year runs from September to August. It is rare for a child to delay starting school until they turn 4 and almost unheard of to wait until they turn 5.

As you can see, by 5 years old most children have already been at school full-time for over a year and will have spent a year or more prior to that attending school half-day. I'm of an age where I have both been a student and a classroom assistant in classes of 5 to 7-year-old children that were expected to sit at their desks and learn - this is no longer the case but even then bad behaviour was the exception rather than the rule. Now our curriculum is less ridged but with more emphasis on learning through play. In my part of the UK, Early years education covers 3 to 7-year-olds regardless of whether they attend school or a daycare centre. If the way full-time kindergarten is structured in your area causes such behavioural issues, I would suggest you research how early education is managed in other countries.

Justine, below, mentioned taking the children out to explore nature - this is definitely something the education structure in my area allows for as you can get so much out it educationally. e.g. counting the spots on a ladybug, learning the colours of the things you see, developing descriptive and positional language, and all this while the children think they are having fun.

So because kids misbehave it’s a terrible idea? What about the kids who do just fine in daycare from 7am-6pm? I think they’d do just fine. As long as there is nap time, it shouldn’t be an issue. Most kids in half day end up going to before and after care anyway, so it’s not much different than being in school for the full day. I’ve been in child care for many years. Now I’m also a mother. I think seeing the situation from both sides is important.

It's sad that kids would be in daycare from 7am to 6pm. Extremely sad. Why would you have kids only to have someone else raise them 5 days a week for the majority of there waking time. Don't bother having kids if you feel that it is ok to have them in baby prison, I mean daycare for 11 hours a day. Just sad.

Amen! But then parents complain because they need the free "childcare" so they can go back to work.