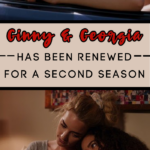 Netflix has renewed Ginny & Georgia for a second season, and I want to scream, “THANK YOU!!”

There have been too many times that a Netflix original has been yanked out from beneath my watching eyes, and I was so afraid Ginny & Georgia would get the axe.

But, NOPE!! The powers that “BE” at Netflix have really come through for all of us who have fallen in LOVE with Ginny & Georgia!

If you aren’t one of the 52 MILLION viewers of the show, which started in February, let me just tell you about it for a second.

It is about an angsty 15 year old — typical teenager, right?!? — and her 30-something year old mother.

Ginny and her brother are constantly being moved from place to place, while their mother tries to find a place that they can call home.

See, Georgia’s past has a way of catching up with them, and it ruins all plans that they have for settling in any one spot.

When they arrive in the fictional Massachusetts town of Wellsbury, Georgia thinks this is going to be the PERFECT place to settle down.

But, life has a way of getting in the way of the best plans.

We don’t know WHAT or WHO is going to show up in season 2 of this wildly popular show, but I can’t wait to find out!

We are so appreciative of the incredible response and love you all have shown Ginny & Georgia. We’re especially grateful to Brianne and Toni, who set the highest bar every step of the way. We can’t wait to return to Wellsbury for season two

Trust us — we are right there with you!! It’s time to go back to Wellsbury!

The second season of Ginny & Georgia — which doesn’t have a release date as of yet — will consist of 10 hour-long episodes.

So, it’s going to be much like the first season — and I’m totally okay with that.

If you LOVED the music from Ginny & Georgia, you have to check out the Soundtrack From The Show!

It is over 50 songs long, and it is abolutely AMAZEBALLS!!

Just go ahead and throw it on repeat — I know I do!