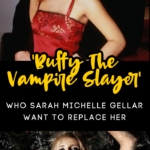 Wouldn’t it be hella cool if they would remake Buffy the Vampire Slayer? Both the series AND the movie are epic must-watch shows!

Sarah Michelle Gellar agrees. Infact, she recently revealed who she would like to see fill her shoes in a reboot of Buffy the Vampire Slayer.

And I must say, after careful consideration, I have to agree with her choice.

In an interview with Evan Ross Katz for his new book, “Into Every Generation a Slayer is Born: How Buffy Staked Our Hearts,” Sarah Michelle Gellar spilled the beans on who she would want to take her place.

Sarah Michelle Gellar isn’t the only one who thinks Zendaya would make a stellar Buffy. Julie Benz, who played Darla in the Buffy series had a little to say.

That would be amazing.

Zendaya has proven that she can hang with the big boys when it comes to action movies. Besides being in Euphoria, where Zendaya plays a drug-addicted teen, she graced the big screen in 2021’s Dune.

We can’t mention Zendaya action movies without mentioning my favorite. She plays Peter Parker’s love interest, MJ, in one of the many universes of Spider-Man. And, might I say, she ROCKED the role!!

Can’t you just imagine her as Buffy? Gah! It would be so good!!

Sarah Michelle played the bad-ass female vampire slayer in the TV series Buffy the Vampire Slayer, first on the WB and then on UPN. It ran from 1997 to 2003.

That show ended nearly 20 years ago?!?! I have never felt older in my entire life.

The show was a hella popular, and it has retained a devoted, cult-like following even 19 years after it was canceled.

The show was based on the 1991 movie, Buffy the Vampire Slayer, which starred Kristy Swanson, Luke Perry, and Pee Wee Herman — er, Paul Reubens.

If you haven’t ever dipped your toes into the Buffy universe, I highly recommend diving right in!!