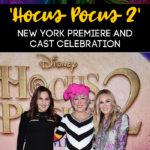 Are y’all getting excited yet?

‘Hocus Pocus 2’ will be available to watch in just days and I am so excited!

The cast and filmmakers from Disney’s ‘Hocus Pocus 2’ had a celebration and premiere of the Disney+ Original live-action comedy in New York at AMC Lincoln Square Cinemas.

It’s been 29 years since someone lit the Black Flame Candle and resurrected the 17th-century sisters, and they are looking for revenge. Now it is up to three high-school students to stop the ravenous witches from wreaking a new kind of havoc on Salem before dawn on All Hallow’s Eve.

‘Hocus Pocus 2’ will premiere exclusively on September 30th, 2022 on Disney+ as a part of the streaming service’s Hallowstream celebration.