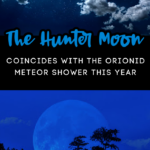 Last year, we got to experience the “Hunter Moon” on Halloween.

This year, it is happening a bit earlier. Like, don’t blink, or you will miss it!!

I looked at the night sky last night, and noticed the moon was just a hair from being full. It was big and gorgeous in the clear crisp night sky!!

The Hunter Moon THIS year is going to happen on the 20th and 21st of October, so you better get your telescopes and cameras ready!!

Do you know why it’s called a Hunter Moon? It is the moon closest to the September equinox, which is the OFFICIAL start of the fall season.

The Hunter Moon usually occurs in September, but every third year, it occurs in October.

It is called the Hunter Moon, because this is typically the time of year that animals have started getting their winter bodies. Hunters are out in full force to hunt for deer and other game.

Now, this year is a bit weird, because we are getting this Hunter Moon in October back to back.

Not only that, the  Orionid Meteor Shower — which I anxiously wait for every year — is occuring at the same time as the Hunter Moon!!

Did you know that the Orionid Meteor Shower is actually debris from Halley’s Comet — which you can only see the actual Halley’s Comet about once every 76 years — that radiates from the Orion constellation (oddly enough, known as The Hunter!)

So, this is going to be a magical week for all you stargazers. If you get hella good pictures, I better see them!!