When you spend 90% of your day at home, if you’re like me you’re in your pj’s, or if its really nice out I’m in my husband boxers with a baggy t-Shirt. So what….they’re comfortable, it’s literally like wearing nothing at all…and it doesn’t get more comfortable than naked, (unless it’s in public, than no) and they have cute designs! Air Force, Superman, American Eagle, Valentines ones that say ‘Love’ all over them, (valentines gift from me) plain blue, the Grinch…I mean, come on…they’re cute. Plus, with a huge t-shirt you only see the bottom inch, so they totally look like baggy shorts. Yes, I’m one of those women who wears her hubbie’s boxers everywhere, and IDGAF what anyone thinks! 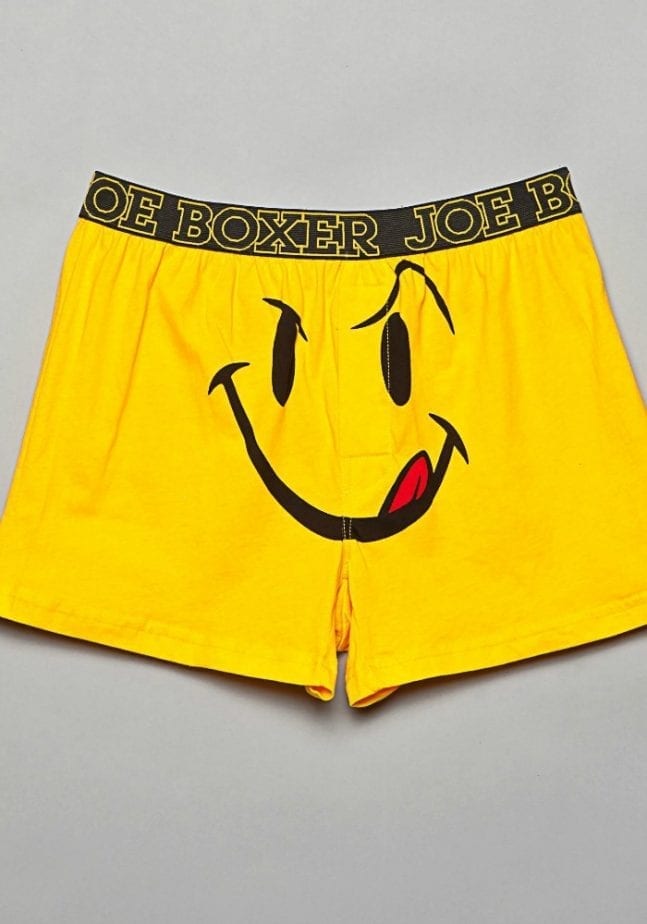 I’ll go to Walmart in them, I don’t even give a crap…I mean, it’s Walmart and I’ve seen some crazy stuff at Walmart. My baggy T-shirt with baggy “shorts”, a pair of flip flops and my hair in a trunch bun…I’m home-stylin’ and I’m comfortable. I’ve never gotten any weird looks (that I’ve noticed), so honestly…I don’t think people even notice and if they did, well maybe they should go try a pair of their husband’s, they might think differently. I might look homeless, but I’m just too comfortable to care.

I decided to wear them the first time he deployed, I figured, “Why not, he’s not using them and I need a pair of shorts.” And so it began. The wearing of the boxers. He thought it was funny the first time he saw me in them…I coyly looked at him and said, “You don’t care, do you?”

He laughed and responded, “No, I don’t care.” I pointed out that you couldn’t see the slit in the front so I saw no reason why I shouldn’t be comfortable…of course he agreed.

He has special ones for work and the military, so pretty much the ‘home boxers’, as I like to call them, have become more mine. And occasionally our daughter’s…again…they’re shorts. They’re totally comfortable to sleep in, so if my daughter doesn’t have any clean PJ’s, I throw her a pair. She shrugs, throws them on, and doesn’t even care. My husband really laughed and shook his head when he saw her in them the first time. He looked at me and said, “Now you have our daughter wearing them? You guys are too funny.”

I just looked at him like ‘yeah so what?’ and my daughter said, “Well, they are really comfortable, soooooo.”

Now, if you’re a boxer wearer like me you know how RIDICULOUS it is to shove those things into a pair of baggy pajama pants…this is for purposes like going out to grab the mail when it’s cold outside. There’s no way in hell I’d wear them under pants for any length of time. How the HELL do men deal with shoving those things into jeans? Push and tuck, straighten out, push and tuck some more. It feels like a bunched up mess! I honestly think they were meant for women as shorts. I really do. Boxer briefs…that’d be better for just slippin’ those pants with out a fight.

I’ve decided that I’m going to go buy some new ones…for him…since I’ve been wearing them out the last 7 years. I’ve literally worn holes in them…torn out the band in a few. I wonder what cute ones he’d like???

reach out to this cyber genius 'HACKINGLOOP6@GMAIL . COM', for any hacking related issue, he's a legit and reliable hacker. He does all sorts of social network hacks like, Facebook, Instagram, twitter, Snapchat etc, also upgrade credit score, clearing of unwanted records. his service is affordable.

I love this because I do the same thing with hubby's clothes. We all love being comfortable in big, comfy clothes and as a woman, I refuse to buy anything but my size so since my husband is way bigger than me, wellllll....yeah I'm stealing some "fat clothes" is what I call them. lolol Great blog!!!