My grandpa had me out helping him work on his little Honda Civic when I was 4 and 5 years old. I knew the difference between a flathead screw driver a Phillips, metric and standard sockets, and open ended wrenches before I was 6. He had me handing him tools and showed me what the different parts of the car looked like.

When I was old enough to drive, my parents had me out there rotating tires, “No daughter of mine is going to be stranded on the side of the road waiting for a man to come change her tire,” my dad and mom would say. They also made sure I knew how to change the oil, air filter, fuel filter, and spark plugs. It didn’t bother me, I actually enjoyed it…I always thought it was fun to get all greasy and hear the engine start at the end of a project. SUCCESS! In short, I might have been a girly-girl, but I can still rebuild an alternator. 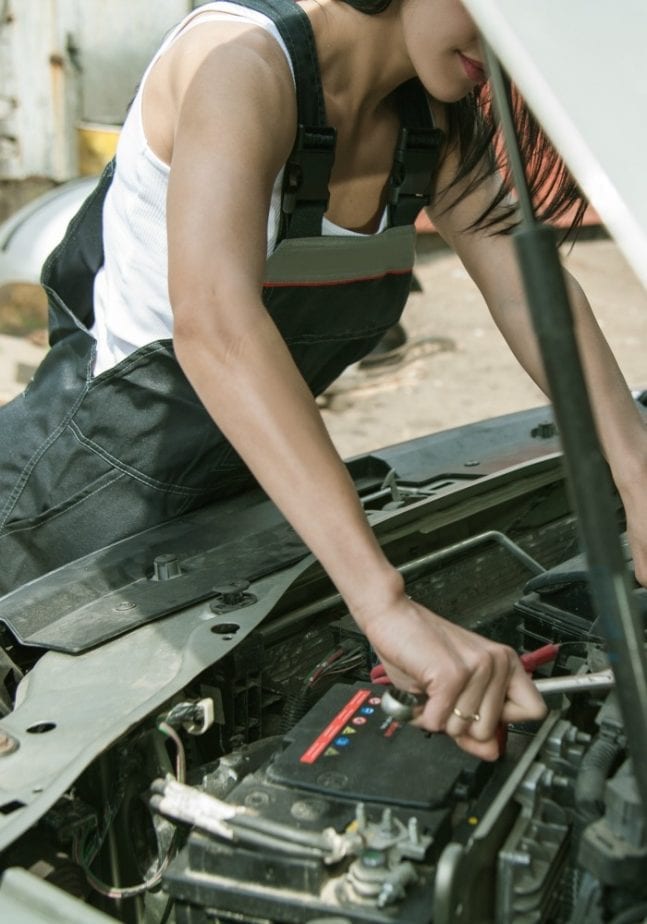 I’m A Girly-Girl, But I Can Rebuild An Alternator

In my first marriage my husband left me driving a 70 something Subaru station wagon that needed a new fuel pump (which he purchased and left in the back seat of the car). We drove that car around, it would die…we’d wait about 20 minutes and it would finally start again, until one day after taking him to work it died on me on the side of the road. Back in those days we didn’t have cell phones to call for help. I finally had enough of his laziness…that new part had been in the back seat for a good month… So, it was at that moment that I remembered what my family had always told me about not depending on a man. I grabbed the new fuel pump out of the back of the car, popped the hood and looked for the same part that was in the box.

I’d never done it before, and I really didn’t know what I was getting myself into, but at this point what difference did it make? I had a tool box in the back so once I found the fuel pump under the hood, I started pulling it apart and put the new one in. Then I said a little prayer and started the car right up. You can imagine how proud I was of myself. You can also imagine my ex-husband’s shock to find out I had done it by myself…on the side of the road…alone…being a helpless girl and all. Ha ha. Plus my parents never let him live that one down.

That marriage didn’t last long and I ended up moving back in with my parents. I had lived in the neighboring state for a few years but decided to go to automotive tech school in my home state. The out-of-state tuition was ridiculous and I could only manage to afford one semester, but it was the semester that taught auto electronics. I learned to rebuild starters, alternators, read wiring schematics and troubleshoot electrical problems within a vehicle. I even learned to arc weld, which is pretty fun once you get the hang of it. I’ve installed more car stereos then I care to count, but I’d rather do that than a whole new wiring harness for a vehicle…I’m just sayin’.

At one point I helped a friend put a 387 big block Chevy engine into a 77 Pontiac Grand Prix with a 350 Edelbrock. That car was fierce. We pulled the bench seats out and put in bucket seats and a floor shifter, he ended up giving me that car as a gift and my parents were sure I was going to kill myself in it. There were a couple times I questioned it myself, but hitting it off the line against a Camero or Firebird was always so satisfying. I loved that car…it was a beast, it was fast and cornered like it was on rails with the sway bar in the back. I eventually sold it for a smaller more economical car, (I’m too embarrassed to even say what I traded it in for) but man, I still miss it. It was my project car for a long time, something I was totally proud of. Whoever ended up with it had fun in it, I’m sure.

I love getting dressed up putting makeup on and looking pretty, but I also love climbing under my Jeep to change the oil. My husband wants to do those things for me, but it’s the best feeling knowing I can do it myself. There’ve been a couple times we’ve troubleshooted issues together and gotten the problem fixed. Working on projects together is sexier than you could imagine. While he was deployed I helped his brother replace the clutch in my Jeep. Talk about a ginormous pain in the back, literally…but, we got it done. I don’t mind getting greasy, and it’s nice to know that if I have to take my rig in to be fixed they can’t pull one over on the ‘helpless little girl’. Yes, I could probably fix it myself, but let’s face it…my body at 42 doesn’t like it very much anymore.  Now I stick to the lighter fixes: oil changes, fuel filters, blower switches (speaking of, I need to do that pretty soon).

Don’t let those girly girls fool you, some of us know more about car repairs than most dudes you know!