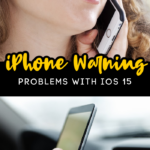 There has been an alert issued for all iPhone users, and this answers some lingering questions I have had over the last couple of days!!

Apple iOS 15 has had nothing but problems, and it’s highly possible (IMHO) that they release it too quickly.

There are several known bugs, but that’s just the tip of the iceberg.

The new operating system is causing huge connection issues when you try to use the Bluetooth hands-free system — specifically in cars.

According to Forbes, people using the iPhone 12 and iPhone 13 are seeing the majority of the problems, but the issues are also spread across multiple different auto brands.

Apple has not publicly addressed the issue, but it is indeed there.

People are connecting to the Bluetooth in their car without issue. BUT, after about 3 minutes into the call, it will just drop.

Can you imagine trying to conduct business on the road, and having to deal with a connection that is shotty at best?

It is dangerous, because when the Bluetooth drops the call, people have to dig around and quickly try and find the phone. If they can throw it onto speaker before the call actually hangs up, they can continue the call.

But, how dangerous is that — to take your concentration off the road like that. Imagine if it happened in traffic!

There have been SEVERAL iPhone iOS 15 upgrades — each with problems and bugs.

When iOS 15.1.1 was released — specifically for iPhone 12s and 13s — the connectivity was supposed to have improved. BUT, alas, the exact opposite is happening.

So, is Apple going to fix the issue? Only time will tell, my friend.