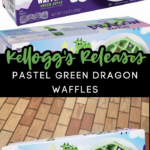 When it comes to Kellogg’s waffles, mythical creatures are always an inspiration.

Considering their latest baked dough perfection which revolves around a fire breathing giant, Kellogg’s has created waffles that taste as unique as the mythical creature itself.

Unlike regular waffles that are commonly colored tan, Kellogg’s waffles are anything but ordinary.

Colored pastel green, the giant creature that typically burns down castles looks friendlier on the waffle box rather than their usual description that is often quoted in fairy tale books.

A quick breakfast made for those who are as strong as a dragon, simply toss the waffles in the toaster for a few of minutes and don’t be shy with the whipped cream, maple syrup, and butter for toppings.

With six waffles in each box, we’re thinking two boxes sound better than one so we can continue to stack our waffles to begin each morning!