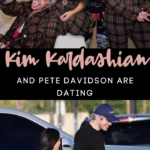 A source close to Kim who told E! News, the two stars are officially dating and claiming, “They are really happy and seeing where it goes.”

“Pete has told her he doesn’t want to see anyone else,” the source says, noting Kim apparently feels the same. “She is telling some people they aren’t super serious but she isn’t seeing anyone else… She’s trying to not make a big deal about it but is super into him.”

The source also made sure to note that Kim is very happy herself, specifically “smitten” over Pete and that “They are making the distance work and have plans to continue seeing each other.”

Now that the two are finally a couple, we can finally combine their names into one, maybe Kete or Pim-berly, but regardless of their new combined name, we’re happy, they’re happy!