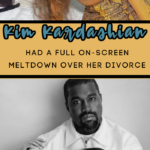 It’s not hard to keep up with the Kardashians. They have been broadcasting their life on tv for years.

Unfortunately, that means the good, the bad, and the ugly is out there for the entire world to see.

Kim Kardashian sobbed through an episode of Keeping Up With The Kardashians, admitting that her marriage to Kanye West was over.

During a trip with her family to Lake Tahoe, California, Kim opened up about the big fight she had with Kanye.

Kim had been previously married to Damon Thomas and Kris Humpries, and is now facing her third divorce.

The couple announced back in February that they would be divorcing, but since then, Kim has kept her relationship problems from the show for the most part.

But she finally broke down and vented to her sisters, stating: ‘I just want to go to my room and never come out’. The footage showed Kim crying, while surrounded by her sisters, saying: ‘I just, like, honestly can’t do this anymore,’ saying she was ‘stuck’ while Kanye moves to a ‘different state every year’.

‘I think he deserves someone that can go support his every move. And go follow him all over the place and move to Wyoming. I can’t do that…’

‘He should have a wife that supports his every move and travels with him and does everything, and I can’t.’

The series finale of Keeping Up With The Kardashians will air next week on the E! network. So we will have to see what else is in store for this dramatic saga.