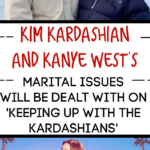 Kim Kardashian has a way of always keeping herself front and center in the celebrity news.

By now, we have all heard about the marital troubles between Kim and Kanye — I mean, it’s been ALL over every news outlet. They are reportedly getting a divorce.

We also know that, after 20 seasons, this is the final season of Keeping Up With The Kardashians.

So, it seems only fitting that they would combine the two stories, and officially announce whether the Kim and Kanye divorce is going to, in fact, happen on Keeping Up With The Kardashians.

That is reportedly EXACTLY what they are doing.

Man, this seems a bit contrived for the media. I mean, they probably are REALLY having troubles, but it is ALL about how they announce it to the world, IMHO.

They are reportedly already living apart — spending the majority of 2020 away from each other, even as far as living in separate states.

Kim is done dealing with Kanye’s unpredictable behavior, she has tried to get him into treatment for his mental health and all attempts have been unsuccessful.

I mean, if they are done, be done, already, right? But, that’s not the way it works in Hollywood.

According to Us Weekly, Kim was taken by surprise when reports came out about her getting divorced, and now, she wants to control the way the PR is put out to the world.

Kim apparently wants to make sure the divorce settlement is solidified before she actually files for divorce.

BUT, we will reportedly find out even more inside information as it gets closer to the end of KUWTK.

I can imagine that this is a messy situation, and it would be tough under ANY circumstance, let alone having to go through it so publicly.

I feel so bad for all the parties involved, but that won’t stop me from sitting my butt in front of the TV with a bowl of popcorn, and seeing how it plays out.

13 shares
Fans Have Started A Petition To Help Bring Back Johnny Depp As Jack Sparrow In The 'Pirates of the Caribbean'
← Previous
Meet Opal, Jason Collier’s Current Wife and Mother of Some of His Children
Next →
Click here to cancel reply.