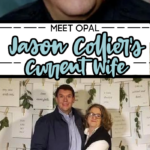 Opal, I’m so sorry that this has happened to you and your family. But I am so glad that you have shared this with the world so that you get justice for the awful actions of your husband.

Opal’s husband is Jason Collier. He is the Police Chief of the Stinnett Police Department here in Texas.

He’s currently on administrative leave because he has been leading a very naughty life! Like you know, having a wife and a few girlfriends…

Jason is 41, he isn’t some young dumb teenager. No this is a whole grown ass man, he knows better.

He has been married two times and has 4 children. 2 of the children were with his ex-wife, and 2 with his current wife (that surely will be leaving him) Opal Collier.

Opal’s husband has been leading some crazy triple (or more?) life. Lies and lies and lies, the drama is thick.

Cecily Steinmetz, shown above says she is one of Collier’s girlfriends. This girl found out some stuff and let it be known!

Jason’s actual wife, Opal, has not commented about any of this so far and it looks like her Facebook profile has been deleted.

I know I fall short daily of being the Godly husband, but know I will work hard to be the man you deserve!

We’re not sure how long Opal and Jason Collier have been married. But he did share a post on Facebook wishing her a happy anniversary last September.

Thank you for loving me, sacrificing for us, and walking this life beside me! I love you… Here’s to many more years and memories to come!

Dude, you blew it.

According to Heavy, Jason and Opal have 2 kids. I really feel for them and I hope that they are being shielded from the internet right now, because the story is everywhere.

Jason also has two more children with his ex-wife. What a selfish dude this guy is.