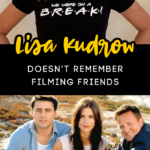 Courteney Cox isn’t the only one who doesn’t remember shooting a lot of Friends.

Lisa Kudrow has stepped up and says she also doesn’t remember filming much of the hit show.

It’s hard to imagine they can’t remember, because they were both in over TWO HUNDRED episodes.

I mean — if you’re anything like me — you can pretty much quote all the episodes. It seems like the cast would remember a bit more. LOL!

Kudrow was a guest on Sirius XM’s “Andy Cohen Live” and answered questions from fans about her life and career. One listener called in and asked Kudrow about Cox’s interview on TODAY earlier this month, when she revealed that she actually doesn’t recall filming many episodes of “Friends.”

Lisa Kudrow even admitted that she hasn’t seen all the episodes. *Shocked Emoji*

At one point, Andy Cohen asked Lisa if the cast (David Schwimmer, Matt LeBlanc, Matthew Perry, Jennifer Aniston, Courteney Cox, and Lisa Kudrow) were given copies of the episodes before they aired.

Lisa, who you HAVE to watch in Space Force, told him that they did not receive advanced copies of the show.

When they first started filming Friends, the entire cast would get together and watch the episodes as they aired.

That ritual, however, did not last during the entire 10 seasons of the show. I supposed it got old after a while.

They all had their own lives to live, and they probably figured they spent enough time together during the week. *Smiley Emoji*

10 seasons are a whole lot of years in one’s life. There were marriages, divorces, babies — they just got too busy.

“I should’ve watched all 10 seasons because when I did the reunion and was asked questions, I was like, ‘I don’t remember being there,’” she laughed —

As for Courteney Cox, she remembers liking that time in her life. She enjoyed and had fun with the cast. BUT, she doesn’t remember much of the actual show itself.

I will go ahead and volunteer as tribute to hang out with the cast and school them on the entirety of Friends. Who’s with me?