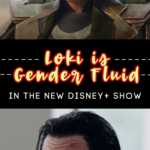 One of my FAVORITE Marvel Characters is Loki — brother of Thor.

I was SO incredibly stoked when I found out that Disney+ was going to have a new series dedicated to my favorite god of mischief.

But, we just found out something about Loki that you might have guessed, but it has officially been confirmed.

Now, you have to pay close attention, or you just might miss the clue in a Twitter teaser trailer posted on the official Loki site.

If you look really closely at his Time Variance Authority Report, it lists Loki’s sex as “fluid.”

Now the fact that Loki is gender fluid has been speculated before, but this news has sparked quite a debate on social media.

Some are claiming semantics of the word SEX — that he can shapeshift into whatever he wants.

Whether he is gender fluid or sexually fluid, he is still AWESOME, and I can’t wait to see more of Loki in action!!

If you want to see the Loki trailer, you may do so HERE.