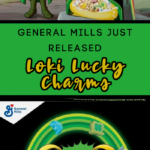 The brother of Thor, The God of Mischief, and the talented shapeshifter is taking a break from competing with the God of Thunder and taking over a popular breakfast cereal instead.

General Mills has recently released Loki Lucky Charms that are as I quote, “mischievously delicious” instead of “magically delicious”, just in time for the new and original Loki series streaming on Disney+ today, on June 9th!

To snag a box, individuals must purchase the box on MischievouslyDelicious.com  beginning today on Wednesday, June 9th, the same time as Disney+ releases Loki.

The dark green and black box of Loki Charms rather than the bright red packaging were used too will cost you $8, excluding shipping.

So while you pour a box of Loki Lucky Charms, you can now watch Tom Hiddleston lead the new Loki series as the titular villain as he resumes his role of the God of Mischief.