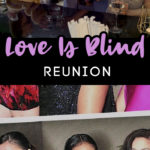 Am I the only one that didn’t know a reunion show was coming out for Love Is Blind? I was VERY surprised when seeing it on my TV!

So naturally, I dropped everything to watch it. This show was such a binge worthy treat during the lockdown that it became almost nostalgic for me!

I feel like the reunion was even more dramatic than the actual show, and it led to me feeling pretty different about a lot of them.

Lauren and Cameron were always my favorite. They seem so genuine and in love. So I was SO happy to find out that they are still happily married two years later!

The only semi negative thing I have to say about them is that there’s not much to say. They were drama free at the reunion, happily in love, and minding their own business for the most part, making them less interesting.

Then we have the Barnetts. I was NOT a fan of them on the show, but fell in love with them during the reunion!

I feel horrible saying it, but I never thought they were going to make it. And yet, here they are two years later, happily married and planning for kids.

The reunion let us see a more vulnerable side of Amber that made me want to root for them even more. Although she did let her crazy side come out a couple times…

Then there is the fiasco that is Giannina and Damien. Like…what?!? I liked them from the start as individuals, but never thought they were good for each other.

Two years later, they are still together, yet Damien brings another girl to the reunion (which I feel he got paid to do for dramatics), and they are still struggling big time.

Word is, they are STILL together. I think it’s time to let this one go…

As for the singles, Diamond still scares me, LC really just wanted to talk about herself, and I finally got a twinge of pity for Jessica when trying to give Barnett a gift (talk about awkwaaaaard). What did you think about the reunion?