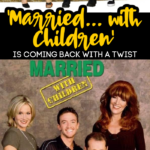 Apparently ‘Married… with Children’ is coming back… but it’s going to be a bit different and I don’t know how I feel about that.

‘Married… with Children’ is one of my all-time favorite television sitcoms, it was unlike any other show that was out there and I loved it.

I loved it so much that we have the entire series and just finished watching it in its entirety for the billionth time, they just don’t make shows like that anymore.

There are multiple reports floating around that say that the original cast is getting back together… with a twist.

At this time we do not know which network will snag the new series, but we do know that the executive producer of ‘Family Guy’, Alex Carter, is writing the series.

So here is the twist and why I’m not sure how I feel about the revival of ‘Married… with Children’… it’s going to be animated.

So yea, the cast will be the same… same voices, but in cartoon form.

The idea for an animated series emerged as it easily accommodates actors’ existing commitments.

Part of the reason that ‘Married… with Children’ was so fun to watch was the actor’s physical comedy as well as the dummies that were often filling in for stunts.

It was over the top goofy and that’s why it ruled, I don’t think a cartoon version is going to be able to match that.

However, if anyone can do it… it would definitely be the people from ‘Family Guy’.

I’ll totally give it a chance, but I’m not getting my hopes up.