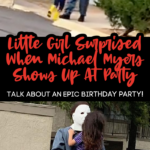 Michael Myers is one of the most well-known horror icons, starting way back in 1978, I was 4 years old at the time.

Some people are absolutely terrified of Michael Myers, but there are the weirdos like me that like Michael… don’t try to figure me out… my brain works a bit different ok?

Apparently, a little Four-year-old girl named Aria Alvarado is a bit like me, and that makes her pretty freaking cool if I do say so myself!

Aria recently celebrated her 4th birthday with her family in West Covina, California.

The event was posted as a video to TikTok where it has more than 3 million views!

Suddenly the well-known theme for ‘Halloween’ started playing and Aria began looking around for Michael Myers, but not in a fearful and ready to run away from the slasher as most would expect.

Nope, this girl was looking for Michael Myers so that she could run to him and declare her love.

Suddenly she spots the masked horror character across the parking lot and her family yells for her that she can’t go by herself, but she doesn’t listen.

After Aria spots Michael she shouts…

Michael Myers, I love you!

Then she runs straight to him, and jumps into his arms!

Her mother, Rose Alvarado planned the Halloween-themed birthday party because they knew how much Aria loved the horror movies.

She’s been loving Halloween ever since she first watched ‘The Nightmare Before Christmas. She loves many spooky movies including ‘Frankenweenie,’ ‘Coraline,’ ‘Corpse Bride’ and especially ‘Halloween’ with Michael Myers.

Before this all went down, Rose asked her daughter how she would feel if Michael Myers showed up at her birthday party, and Aria could not contain her excitement!

So, Rose, had her husband dress up as Michael Myers complete with the jumpsuit and mask to surprise Aria at her party.

We knew she liked him, but we did not expect her to react like that. Her reaction was so funny, so I thought I’d post the little video online.

Rose isn’t very active on TikTok and had only posted once before so she was shocked to wake up and see that the post had gone viral.

Even though they received a lot of supportive comments, there were also other comments that stated how inappropriate this was and even questioned their parenting.

Y’all need to chill, the girl obviously knows that Michael Myers is fictional, do you really think she would run to him instead of away from him if she thought it was all real?

I’m one of those people that LOVE to be scared, haunted houses, movies, you name it, 2 out of 3 of my own kids are the same!

You can watch the TikTok video here!