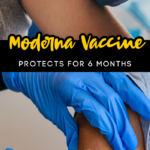 Moderna has determined that their vaccine is really efficient to protect against the virus for the first 6 months after you finish your second dose.

Since the start of vaccinating people with the Moderna vaccine, this nasty Delta variant has reared its ugly head.

The Delta variant is an entirely different monster when it comes to the fight against the coronavirus.

While Moderna initially showed a 93% effective rate against the virus, they are now saying that a third booster is going to be needed, after 6 months, in order to maintain protection against the deadly Delta variant.

We believe a dose three of a booster will likely be necessary to keep us as safe as possible through the winter season in the Northern Hemisphere.

While there has been much discussion as to whether to booster the vulnerable population, scientists aren’t yet certain that boosters will be needed.

On Wednesday, the World Health Organization called for a moratorium on boosters till the end of September. The group urged health leaders to focus instead on vaccinating 10 percent of people in all countries.

The scientists think it might be prudent to wait and see if the boosters are, in fact, needed to bolster continued immunity from the virus.

They say that they “want this vaccine to protect against the kind of illness to cause you to seek medical attention, or be hospitalized.”

Unti that it is proven that the vaccine is no longer protecting against severe illnesses, they want to hold off on giving out a booster of the vaccine.

No need to get that big stick shot-in-the-arm unless you have to, right?

Now, neither the Moderna nor the Pfizer vaccines have been fully approved by the FDA.

That doesn’t mean you should avoid getting them.

Many places are starting to require proof of vaccination to participate in indoor activities, because they don’t want the virus to spread like wildfire amongst people who aren’t able to social distance from one another.

The F.D.A. is expected to give full approval to the Pfizer-BioNTech vaccine next month. Moderna filed for final approval of its vaccine on June 1, and expects to complete its submission in August. Pfizer is also expected to ask the F.D.A. to authorize a booster dose this month.