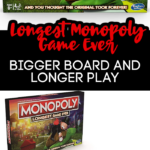 As if Monopoly wasn’t already the LONGEST game ever, you can now get a Monopoly game that is specifically designed to last an infinite amount of time.

Technically, the game HAS an ending, it may just take you days to get there! The game is over when someone owns ALL the properties.

My family is a bit addicted to the game of Monopoly. We get just about EVERY version that comes out. Aren’t they all the same, you ask? Nope. Obviously you haven’t tried Unicorn Vs. Llamas Monopoly, Disney Theme Park Monopoly, Target Monopoly, or Boooo-opoly!

Monopoly is definitely our go-to game for Family Game Night!! But, we’ve never tried a version of Monopoly that takes days to play. LOL!!

First, it is important to note that this board is BIGGER than normal Monopoly game boards. A normal game of Monopoly has 22 properties: “twenty-two streets (grouped into eight distinct color groups), four railroads, and two utilities.”

THIS Monopoly game has two layers of game play, with a whopping 66 (SIXTY SIX!!) properties: like 48 properties, 12 railroads, like 8 utilities, and a bunch of Chance and Community Chest spaces.

Can you see why this game might take just a little bit of time to play? Ha!

Keep on playing’: think the original Monopoly game takes forever to play. It’s got nothing over this edition of the Monopoly game. Longest…monopoly game…ever

I forgot to mention, there is only 1 die instead of the standard 2 dice — so it is going to take you longer to get around the board right off the bat!

It also has tortoise and hare gameplay tokens, so you can finally win the debate about which one is quicker!!

This game also has rules that are unique to THIS version of monopoly: there are no actions allowed, you can rip the money in half if you run out (yes, really), you can buy properties from people for $10, and bankruptcy doesn’t end your race to the finish.

Recommended for people who think their family is too perfect a family unit and much easier to expose people’s true beings than a bear fight to the death. You will look at your family in a different way after this has been played. [5 Stars]

This version of Monopoly runs $21, and would make the PERFECT gift for any connoisseur of gameplay.

You can get your own version of the MONOPOLY Longest Game Ever on the Amazon website.