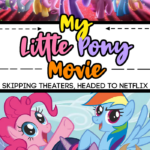 It doesn’t seem to matter how old my girls are, they STILL love ‘My Little Pony’. Now they’re super excited to hear that the new movie is headed to Netflix.

According to Variety, Paramount Pictures had originally planned for the new ‘My Little Pony’ movie to debut in theaters on September 24th, 2021.

However, with so many theaters being closed due to the pandemic, Hollywood studios has had to postpone so many releases.

In some cases, they skipped the theaters altogether and went directly to streaming.

Entertainment One, which is Hasbro’s entertainment studio, chose to sell the movie to Netflix.

Netflix has been adding more content for younger viewers and so this is perfect!

In order for Netflix to compete with Disney+ they need more kid friendly shows and movies.

Netflix has also acquired ‘SpongeBob: Sponge On The Run’, SpongeBob happens to be another favorite in our home.

This new ‘My Little Pony’ movie is directed by Mark Fattibene, with Peter Lewis and Cecile Kramer as producers.

As of right now, there has not been a Netflix release date listed for the new ‘My Little Pony’ movie. We do believe it will be later this year though and we can’t wait!