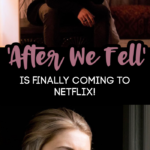 Put a hold on The Grinch, Home Alone, and every other Christmas movie because After We Fell is finally coming to Netflix, according to a Facebook announcement from the streaming platform itself!

The last and final movie of the After series has been long awaited and considering the end from the second film, we were all left on one big cliffhanger, Tessa’s dad.

As we all know, the final few seconds of the second movie shows Tessa reaching out to a homeless person on the street and saying ‘dad’ in a questioning tone.

Assuming your questions are similar to mine, “What happened to Tessa’s dad and why is he not in her life?”

While the third movie should answer all of our questions, another main concern is Tessa and Hardin’s relationship; will they continue to date or will they move on from each other?

After We Fell fast forwards to a few life changing moments that might derail the couple’s plans together, and Netflix is putting Hardin Scott and Tessa Young back on your living room screen January 17!