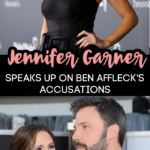 I knew this was about to become a heated topic. You can’t just tell the world that you blame your wife for your alcoholism and get away with it!

Ben Affleck opened up to Howard Stern about his past, but unfortunately, threw Jennifer Garner under the bus in the process, and now she’s speaking up.

A source told InTouch that Jennifer feels that Affleck’s words were “disrespectful” and a “slap in the face” to their family.

“Jen isn’t particularly happy with Ben’s wording on the subject of why they divorced. He gave an interview saying he felt ‘trapped’ in the marriage, Jen wouldn’t have used that phrase or even opened up publicly like that. It was disrespectful. If you think about it, it’s kind of a slap in the face to Jen and their kids.

I think it’s time for Affleck to own up for his own mistakes and not drag his ex-wife and children back through this drama.