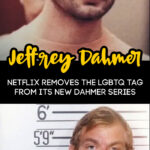 Netflix has removed the LGBTQ tag from Dahmer — Monster: The Jeffrey Dahmer Story, and it should have never been there in the first place.

Dahmer — Monster: The Jeffrey Dahmer Story has blown up on social media and on the TVs of just about everyone I know.

In its first week on Netflix, the Dahmer story earned more than 196 million hours viewed.

Now, I don’t do math, but that’s a HUGE number — and that number has earned the show the top spot on Netflix for the week.

But, there’s one little thing that has bothered a ton of people — and rightly so.

Netflix gives its shows tags — like “true crime,” “comedy,” “reality,” “social issues,” “romance,” “horror,” etc. — to help people identify the genre of film that they are about to watch.

One tag that the streaming giant used to describe the Dahmer story is “LGBTQ.”

Pretty much the only LGBTQ about the show is that Dahmer engaged in kidnapping, drugging, murdering, and and totally violating and desecrating the bodies of queer men.

Not something to celebrate.

Why in the heck did Netflix include the LGBTQ tag on this show?

Was it because of Dahmer’s homosexuality?

Or was it due to the homosexuality of his victims?

As you can imagine, this choice by Netflix to tag the show as LGBTQ created a TON of backlash.

So much so that Netflix quickly dropped the LGBTQ tag.

This show is about “True Crime.” A grizzly true crime. And, that’s all it should be labeled as.

That’s about all I have to say about that.

Go ahead and watch the Dahmer story. But, do so as a “True Crime” event, and NOT as an “LGBTQ” event.