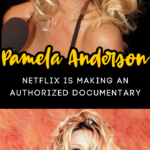 Netflix is about to make an actual documentary on the life of Pamela Anderson.

It’s going to be more than just a scathing look at her life with Tommy Lee and that damn sex tape.

Have you watched Pam & Tommy on Hulu? It’s a biographical drama series about their turbulent marriage and that sex tape that was illegally distributed behind their backs.

Basically, Hulu based the story on a 2014 Rolling Stone article, which means that they didn’t have to get any permission from any of the parties involved before they told the unauthorized story.

That means that Pamela Anderson had absolutely no say in what or how things were going to be portrayed in this Hulu drama series.

As a friend of Pamela, at least no one will ever ask me again if the tape was really stolen. But imagine if a celebrity today had their nudes leaked and then Hollywood recreated not just the crime but the actual nudes — that would never happen. In the ’90s, Pamela’s body was deemed by a judge to be public property. There was no question the tape was stolen property, but the court decided it wasn’t private property because her body belonged to the world.”

A source to Entertainment Weekly

This Hulu version spilled the tea on all the juicy stuff we have been dying to know — the gossip.

The Netflix version of things is going to be a little bit different. It’s an actual DOCUMENTARY. It’s about MORE than just the scathing details that Pam would rather forget.

[It’s] an intimate portrait embedded in the life of Pamela Anderson as she looks back at her professional and personal path and prepares for the next steps on her journey.

So, Pamela Anderson is actually going to get a say, so to speak, as to what goes into this story. It’s her story from her point of view.

It will actually have real interviews with Pam, and real footage of events — not just dramatized stories.

This project doesn’t yet have a title, but it’s been several years in the making.

We do know that Ryan White will direct this Pamela Anderson documentary. Mr. White has previously made some poignant and hard hitting documentaries that have been excellent to watch — The Case Against 8, The Keepers, and Ask Dr. Ruth, just to name a few.

I have no doubt that he will do Pam justice.

Pamela even took to Instagram once Netflix made the announcement about the upcoming documentary.

My life. A thousand imperfections. A million misperceptions. Wicked wild & lost. Nothing I could live up to. I can only surprise you — Not a victim, but a survivor and alive to tell the real story.

The Netflix documentary on Pam Anderson doesn’t yet have a release date, but of course, we will tell you as soon as we get the word.