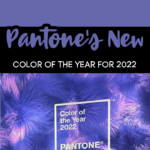 For the first time in Pantone color choosing history, the company has created a new shade for the upcoming new year!

The new shade will make you crave this color in paint swatches to cover the bedroom walls with.

The subtly bright and energetically vibrant color is a mix between blue, violet, and red; so without further ado, here’s introducing the new color shade, ‘Very Peri’!

Pantone 17-3938 Very Peri is a combination of periwinkle blue with violet red undertones.

“It was really important for us to come up with a new color, because we have a very new vision of the world now,” Pantone Color Institute executive director Leatrice Eiseman told CNN.

After the nationwide lockdown in 2020, Pantone decided to pick two colors to idolize the following year which included Ultimate Gray and Illuminating, a sunny yellow, representing reassurance and resilience during an age of difficult times as well as keeping optimistic heads for the future months ahead.

2022’s ‘Very Peri’ symbolizes something different, and that is the new changes the world is currently forgoing which is ultimately why the new shade was created, to look beyond the uncertainty of the pandemic.

Pantone describes the color as the “happiest and warmest of all the blue hues,” including the “faithfulness and constancy of blue with the energy and excitement of red” to show an “empowering mix of newness” with “carefree confidence and a daring curiosity that animates our creative spirit,” explained the company in an announcement.

“It’s unusual to refer to blue as ‘happy,’ but when you add that red element to it, that’s exactly what happened,” Eiseman said, speaking to Time. “We felt it was so important to put together a color that encapsulated the feeling of newness.”

The man or woman behind the decision; well, according to Pantone’s website,

“Twice a year Pantone hosts, in a European capital, a secret meeting of representatives from various nations’ color standards groups. After two days of presentations and debate, they choose a color for the following year.”

Cheers to 2022 and the newly invented shade of Periwinkle; now if we can only get this shade in a full gallon paint can please!