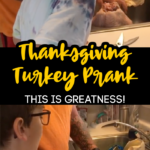 I’m always ready to play a great prank on the kids, and this one is HILARIOUS!

At our home, we are always pranking and scaring each other, it seems like I am usually the victim of these games and when I die of a heart attack you’ll know why.

This mom and dad pranked their son in one of the most hilarious ways last Thanksgiving and his reaction was so hilarious that it quickly went viral.

The caption on the TikTok video reads:

This was a perfectly hilarious harmless gross prank!

In the TikTok video, you can see the dad messing with the raw turkey, preparing it for cooking.

The son is nearby and the mom asked her son the following:

the mother said to her son

The boy was obviously confused about how he could tell and told his mother that he didn’t know.

So she told him to look at the inside of the turkey, and he said that he couldn’t tell and didn’t know what the difference was.

This is when it gets hilarious!

The dad pulls the neck of the turkey from the inside and the son starts gagging and wants to flee the scene!

Everyone is laughing and you can not help but laugh while you watch!

the son asks in the video

When he asks that question, the parents were overcome in hysterical laughter and that is contagious!

If you need a good laugh today, you can watch the TikTok video here.