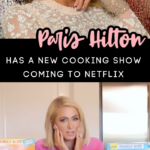 Paris Hilton has been green-lighted to star in a new Netflix Original show, and get this, she’s going to be cooking.

Do you remember the fiasco that was Paris in the kitchen making lasagna last year.

That is 16 minutes of my life that I will NEVER get back — but I just couldn’t stop watching the train wreck that was Cooking With Paris.

So this new Netflix show is going to be called Cooking With Paris — just like her YouTube series (that lasted all of one episode).

But, this time she won’t be really teaching us how to make anything — thank God — this is going to be about Paris figuring her way around the kitchen.

The series will take a spin on the traditional cooking show, as Hilton is not a trained chef and doesn’t really know how to cook — but she certainly knows how to entertain viewers at home.

She will, of course, have some of her famous friends along for the ride and helping her out.

We don’t yet know which of her friends is going to grace the show, but I’m excited to find out!

Cooking With Paris will drop on Netflix August 4th — just around the corner.

There are already 6 half-hour episodes in the queue of shows, and I’m betting they all arrive at the same time.

In this show, we will get to go from start to finish on a recipe with Paris.

We will start with her in the grocery store; we will learn to saute, zest, and baste; and we will get to witness the final product.

Paris has her hands all in this project, as she is both the star of the show and the executive producer.

Look for this new (I’m hoping not) train-wreck-of-a-show early in August.

As long as she doesn’t make lasagna, we will be good!