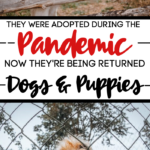 When the pandemic first started, I saw the trend people were on of adopting a puppy or a dog.

Like they were clearing the shelters to almost zero capacity in some areas, and while that sounds awesome… I knew it was going to backfire.

Don’t get me wrong, I love dogs and I have 4 of them, but rushing into choosing a dog rarely works out the way people think it will.

Owning a dog isn’t a trend, it’s a responsibility, work, money, and a lot of your time.

So many people were working and attending school from home and they were lonely.

Puppies and dogs became a filler for the social life they were missing.

Now that people are returning to work outside the home, and in-person classes… the dogs are now an inconvenience for those same people.

Aron Jones also told USA TODAY how the amount of returns has DOUBLED from what they normally deal with in a year.

Those puppies that were adopted out are now more than a year old and probably unsocialized and untrained and harder to adopt out again now.

The trends that we’ve seen is the people who adopted, either they didn’t have any other dogs or pets or they were first-time dog owners, and I think that was the biggest thing.

It’s heartbreaking, people take them in because they are cute and small and they entertain them.

Untrained and Unsocialized With The Outside World

Then they grow and no one wants that responsibility anymore so they return them.

I’m sure some of it is due to adopting dogs without first researching the breed and it’s needs.

I mean, tons of dogs are cute puppies, but many of them grow up to be dogs that need jobs and are not suited for apartment life.

Some of these dogs are not cut out to be couch potatoes when they were literally bred for herding sheep, or keeping a bull in line at the farm.

A lot of the dogs being returned have no training, but don’t let that prevent you from adopting one of these dogs.

You Have to Put in the Work

Training can happen even in an older puppy or dog, but you have to be dedicated.

I foster for rescues and when I have a dog in foster care I teach them all basic obedience.

This makes it easier for them to get adopted and have a foundation started.

Jonas even said that one person drove all the way from California to Colorado to return the dog they adopted last year.

They said it was because it was “uncontrollable”.

So for a year, this dog was likely just coddled like a baby and not trained in even the most basic skills most likely.

Totally set up for failure, that sounds harsh, but this is facts.

Pet owners need to work through possible separation anxiety issues, prepare pets for time alone, and look into hiring a dog walker if the dog needs to go out during the day. It was common to have pets and full-time jobs before the pandemic, so there’s no reason people going back to work can’t successfully keep their pets, with some adjustments and planning.

We Will Need More Fosters To Help These Dogs

According to Best Friends Animal Society, owner surrenders are up 82.6% compared to 2020.

Our pets have been there for us and provided companionship and comfort through an extremely difficult year, and we should honor the commitment we made to them through adoption.

It’s really hard for me to see this happening.

I want to volunteer my time to help some of these people train their dogs so they’ll keep them… I’m only one person though.

This breaks my heart. What website can we see what’s dogs are available for adoption?