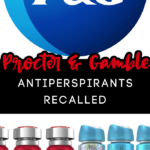 Deodorant and Antiperspirants are definitely an important part of everyday life.

They are good — and I would argue necessary — until they try to kill you.

If you prefer those aerosol deodorants and antiperspirants — the ones that spray out a cloud of the white stuff — you’re going to want to pay attention.

Procter & Gamble has issued a voluntary recall of specific Old Spice and Secret aerosol spray products because they contained benzene.

What the heck is benzene, you ask?

It is a widely used chemical that is present in cigarette smoke, gasoline, and car exhaust. It is also present naturally in volcanoes and forest fires.

You’d think, since it is so prevalent, you’d hear more about it, because it’s actually dangerous.

Benzene works by causing cells not to work correctly. For example, it can cause bone marrow not to produce enough red blood cells, which can lead to anemia. Also, it can damage the immune system by changing blood levels of antibodies and causing the loss of white blood cells.

The FDA does allow benzene in certain products at 2 parts per million. BUT, it turns out that some Procter & Gamble aerosol deodorants and antiperspirants contain more than the allotted amount of benzene.

Technically, back in 2018, the FDA said that because benzene is a class one solvent with “unacceptable toxicity,” it shouldn’t be used to manufacture health products. But then came the pandemic, and the agency temporarily eased its restrictions on the chemical, establishing the 2 parts per million limit for liquid hand sanitizers.

Actually, many products — including some by Equate, Tag, Sure, Summer’s Eve, Victoria’s Secret, and more — contain more than the 2 parts per million of alloted benzene, but Procter & Gamble is the only one to issue a voluntary recall.

There were 8 types of Old Spice and Secret antiperspirant that were part of the recall. All of the specific products are listed on the Procter & Gamble press release.

If you purchased any of these Old Spice or Secret products that were included in P&G’s recall, the company says you should stop using them immediately, throw them out, and contact their customer care team at 888-339-7689 from Monday – Friday from 9 a.m. – 6 p.m. EST. They also give instructions for how to be reimbursed for eligible products.