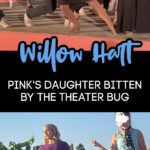 When you’re Pink’s daughter, of course you are going to be super talented in the musical department!

Willow is proof of that. Pink and Carey Hart’s 11-year-old daughter has been “bitten by the theater bug.”

She is in, not one, but TWO different productions this summer, and it looks like she’s totally rocking it out!

According to Carey Hart’s Instagram page, Willow has played parts in both Grease and High School Musical over the summer.

I’m so proud of the lil woman that willow is becoming!!!! She has been bitten by the theater bug, and she is killing it!!! — It seriously rattled me when seeing her on the stage and how she is getting older 🤣. I love you munchin, and so proud of you.

Carey shared a few pics of her onstage, and one of him giving her cuddles — so cute!!

It was last year when we saw Willow and her mom collaborate on “Cover Me In Sunshine,” the sweet little track you can find in Pink’s All I Know So Far: Setlist Album. (You can hear it HERE)

We also know that Willow isn’t afraid to get up in front of a crowd. Pink and Willow performed a synchronized aerial acrobatic routine together at the 2021 Billboard Music Awards.

Don’t worry, the spotlight is on Willow right now. But, Carey and Pink regularly gush about their 5-year-old son, Jamison. Their kids are indeed the center of their lives.

Plinking targets w/ Jamo!!!! He is getting good!!! Shot through about 50 rounds from 20 ft to 60 ft and didn’t miss a single one! He is learning gun safety, how to handle, and the concentration and breathing it takes to shoot.