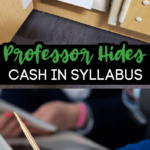 In the beginning of every semester, college professors hand out syllabuses that outline the work that will be assigned throughout the year.

While some students read the syllabus carefully and thoroughly, other students think the assigned work is only tedious, and skim through the outline instead.

Checking if his students actually read the guidelines in front of them, this professor from Tennessee hid an Easter egg inside of the syllabus.

Kenyon Wilson, the associate head of performing arts at the University of Tennessee at Chattanooga decided to hide a hint that lead to a cash prize in the syllabus he created for his music seminar class.

Within the syllabus, the hint read:

“Thus (free to the first who claims; locker one hundred forty-seven; combination fifteen, twenty-five, thirty-five), students may be ineligible to make up classes and …”

The first student to read the hint and claim the cash would have been led to a locker that held $50 in cash with a handwritten note underneath that read “Congrats! Please leave your name and date so I know who found it.”

“It an academic trope that no one reads the syllabus,” Wilson told CNN. “It’s analogous to the terms and conditions when you’re installing software, everyone clicks that they’ve read it when no one ever does.”

At the end of the semester, the bill was still there with a class made up of 71 students.

While Professor Wilson waited until the semester was completely finished before checking the locker again, he revealed the hidden cash on Facebook that later went viral on the social media platform and told CNN, that his students were “good sports” about the unclaimed prize!

“I know my students read, and I don’t expect them to religiously go through word-by-word but if they did, I wanted to reward them.” Wilson told CNN.