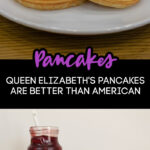 I fancy myself a pancake connoisseur. Not a pancake snob, mind you. I’ll eat the crap out of just about any pancake you stick in front of my face.

But, when I say these Queen Elizabeth pancakes are the BOMB, I’m not joking around. They are really freaking good!

Now, these are ACTUALLY from the kitchen of Queen Elizabeth.

Do I think she put an apron on, doused herself in flour, and got to mixing up a batch of these tasty treats? No. I’m not dumb.

But, I do think these are the pancakes she probably preferred — and for good reason.

These are actually called “drop scones,” but they taste like the best pancakes you will ever put in your mouth.

Fun fact: According to Town and Country Magazine, Queen Elizabeth allegedly gifted this “drop scone” recipe to President Dwight D. Eisenhower in 1959, when he and his wife fancied a stay at Balmoral.

Right off the bat, you will notice that these “drop scones” (also called Scotch Pancakes) are a bit thicker and smaller than their American counterparts.

But, give them a taste. Holy Puffy Pancakes! They are just the thing that deserves to be at a high tea with the Queen of England.

So, how do you make these Queen Elizabeth pancakes?

It’s pretty easy. You have to take it old school, and get out the ingredients and a mixing bowl and spoon. There is no pancake mix involved.

It is first important to note that the recipe calls for 4 “teacups” of flour. A “teacup” is roughly 3/4 American cups.

Beat the eggs, sugar, and half of the milk together really well.

Add the flour, the baking soda, the cream of tartar, and the rest of the milk to the egg mixture, and mix it together.

Fold in the melted butter.

Drop like you would a small pancake onto a greased, hot griddle. When it gets bubbly, flip it. Cook until done.