Okay, when it comes to books– literature and such, I feel like I have an okay grasp of what’s good and what isn’t. I mean, I went to school to learn just that, I’m an avid reader (and have been for a long time). Basically, I know my stuff.

So, when Fifty Shades of Grey became the new Twilight, I started hearing a lot of talk about it. Many people said it was horrible, Twi-Hards everywhere fell in love with it. Well, I knew what I had to do… form my own opinion. And the only way to do that was to read the book. So, I fired up the Kindle App on My iPhone and downloaded it. 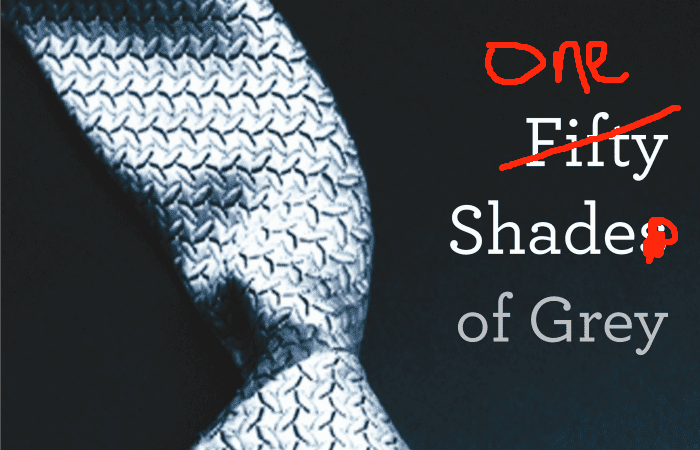 That’s right. I read Fifty Shades of Grey so you don’t have to. You’re welcome.

As soon as I opened it up, I realized I had read this before. Someone actually linked it to me years ago as some “OMG–YOU WILL NOT EVEN BELIEVE THIS! LOL!” Twilight fan-fiction. So, I actually read this story back when the main characters, Christian and Anastasia, were actually Edward and Bella, and that random guy with the dreads who she walked past in the beginning was actually vampire-stalker extraordinaire, Laurent.

Fifty Shades of Grey pretty much starts when Anastasia Steele interviews Christian Grey for her college newspaper. He’s a business-tycoon type, and she’s just a mousy girl, but when she trips and falls into his office, it’s love at first sight. (Dude, that’s fine– it’s’s a silly reason for them to fall in love, but it’s a romance novel. So I can accept this.)

They leave each other with a handshake, feeling the electric surge of attraction when they do. Ana goes home to her best friend and roommate Kate, and  she just can’t get Christian off her mind. He’s hot, he’s sultry, and he’s the first guy the 22 year old girl’s ever even considered having a crush on. (She has plenty of suitors, her hot photographer friend, the cutie at her job, etc.– she’s just never felt like dating or kissing anyone before.)

Christian shows up at the hardware store where she works, and Ana is totally shocked. He’s all smiles and stormy eyes, she’s all swoons and clumsy moves. How could the megamegabazillionaire ever be the least interested in her? Well, she’s in luck– they need pictures of Christian for the newspaper article and since he’s sweet on Ana, he totally agrees.

The photo session is way awkward, because remember the hot photographer who is head over heels for Ana–it’s his job to take the pictures. This doesn’t bother Ana in the least, though. She’s only got eyes for Christian. He asks her out to coffee after, and when she says no (because she has other stuff to do, natch) he refuses to hear of it and they’re off for some Java. (Well, Ana drinks tea because she hates coffee.) On the way home she slips and falls into Christian’s arms. He almost kisses her, but then stops. He looks longingly into her eyes and tells her he is not the right man for her.

Okay fast forward some because the novel drags on and on. Ana graduates from college and goes out with her roomie and the hot photographer (his name is Jose, btw) to actually get drunk for the first time in her entire life. (Oh Ana, she is SO sheltered. We’re supposed to think this is her adorable, quirky little trait.) She ends up drunk dialing Christian from the club, he freaks out that she’s out being harmed in some way.

Christian shows up just as a drunk Jose is putting all the moves on Ana. Christian turns into the super-controlling-furious guy, ready to kill Jose… but somehow he gets over it. Oh, and he’s brought his brother, Ethan, with him to the club. He falls immediately for her best friend Kate, and they’re supposed to be the perfectly normal parallel relationship throughout the series that has Ana pining away. (Don’t worry, later on it all shakes out so Jasper ends up with Alice.)

I know what you’re thinking here? How the heck does he just show up everywhere she is? Oh… well, you see, he’s major rich. That means he can track her cell phone and keep tabs on her wherever she goes. (Attractive, right?)

He asks Ana to be his next submissive (that means he’s going to get her naked and boss her around) and she doesn’t really know what to say. Because– it turns out she’s a VIRGIN. Christian is shocked, but decides to immediately rectify the situation. He scoops her up in his arms, and they’re off to his bedroom. (That’s right… this girl who has been the object of many an affection over the years, but completely ignored them all without so much as a kiss has decided to sleep with the megamegamillionaire on the first date. But, not because he has a helicopter and a big fancy apartment overlooking Seattle– it’s because he’s got stormy eyes.)

Okay fast forward some more… now that he’s solved that whole Virgin fiasco, he wants her to sign a contract and become his submissive. They email flirt a bunch (which is probably the cutest part of this whole book) and then they make out and do a bunch of crazy sex stuff that I won’t go into here. (Seriously, it’s the reason the book is popular– so if you want to know about all that, then by all means buy the book!)

Anyway… that’s the whole struggle of the book. She doesn’t really want to be his submissive, but she’s TOTALLY fallen for him- so she keeps thinking she’s willing to try it but never actually SIGNS the contract. He starts to realize he’s in love with her… but he has some sordid past (that we’re left guessing about until he reveals he was abused as a kid like it’s some big shocker) so he doesn’t think he’s worthy of her real love and affection.

So this  back and forth flirtyness goes on for a while  without any real plot twists or turns until the end… Ana finally gives in and lets him spank her with a belt. It hurts a whole bunch (ya think?) and she freaks out. She yells at him to get his s#$% together and runs out the door because he’s just too jacked up for even her to deal with.

tl:dr Hot virgin makes it with a weird control freak. He’s too kinky for her, so she leaves.

And that my friends is Fifty Shades of Grey. I’m sorry.

Really? Mainstream? As in the majority? Or a fiction read that has the highest readership?I respectfully disagree!! Rather, my perspective is more of a counterculture - just my take after having tolerated 3/4 of the first book. Admittedly, I'm not big on fiction, but, curiosity got the best of me as well. A simple minded read for simple minded readers, I guess.

And what about the part that his "alternative" sexual habits that leave her butt black-and-blue make her feel bad about herself? She doesn't really consent, doesn't like it and hates herself afterward. That's abuse, not bedroom play. Besides the writing, this made me hate the book.

Thanks for the laugh!

So...all this begs the question: why did it sell so many copies? How did it get so popular? What was the catalyst that kicked it from "spine-out-on-the-shelf" to a mega-bestseller? I am not be snarky, I really want to know. Is the non-writing community really that easy to fool? Tell me!!!

@Jason Myers, That's what I don't get. The only thing I can think is that it started out as a Twilight Fanfic, so all those moms that really wanted Bella and Edward to do the nasty fell in love with this book because they are finally doing the nasty!

OMG! that book was bad on so many levels. Funny review.

@Robin, so very many levels. lmao!