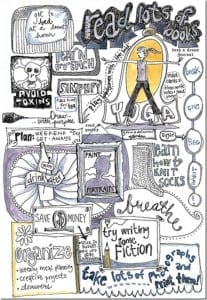 I’m not so great with the resolutions. I am the kind of person who just sort of shuts down and does nothing when overwhelmed.

Note to self: An awesome resolution would be to try and work on that whole shutting down when you’re overwhelmed thing.

Note to self that just wrote that note to self: Um, shut the hell up. I’m doing a thing here.. and that sounds like one of those resolutions that will just overwhelm me–then I won’t do it.

So, I’ve decided to break it down this year. I know something I should be doing for me, my sanity, and even my career is blogging more. You see–I have a tendency to only blog when I feel like it. Which can result in like eleventy million (it’s a word–cause I say it is) posts in one day, and then I am totally silent for a week.

A lot of that could, of course be solved with just scheduling posts for future dates… but the thing is–then I feel like I’m cheating you, internet. It’s like I’m playing an evil trick–pretending like I just magically came up with an amazing awesome idea off the top of my head and whipped it into blog fodder for all the world nine people to read. That would be crappy. So… instead I am just going to go for it.

During the month of January I will blog every day.

Whew, now that I’ve said it… I am a little stressed out. Can it be done? How will I be interesting? Will you guys make fun of my boring posts behind my back and call me evil names on your twitter feeds for appearing haphazardly in your google reader with nothing important to say.

So, I’mma just gooing to say it again.

During the month of January I will blog every day.

Do you have a resolution too big to think about encompassing the whole year with? I say give my one month at a time surefire plan a try!

Every day? Yikes! That's a lot of writing! I blog MWF and even that can be a challenge. But being regular is good...in more ways than one :D .-= Sherrie Petersen´s last blog ..Hope Beach =-.

@Sherrie Petersen, ya know, I thought I'd hate it... but it's been kind of fun so far. I am not blogging anything big or fancy--just your every day blogs, but it seems to be working so far :)

@jmartinlibrary, why yes... yes I think we CAN count ourselves twice :)