Let me just say that Snow White is one of my all time favorite movies. It holds serious sentimental value for me, because it was the first movie I ever saw in the theater, and it was a special outing with my mom I’ll never forget.

So, yesterday when Snow White was on the Disney channel. My daughter jumped and down a bit, extra excited to watch with me, and we snuggled up on the couch to enjoy a classic.

Then, the writer in me started analyzing the characters. 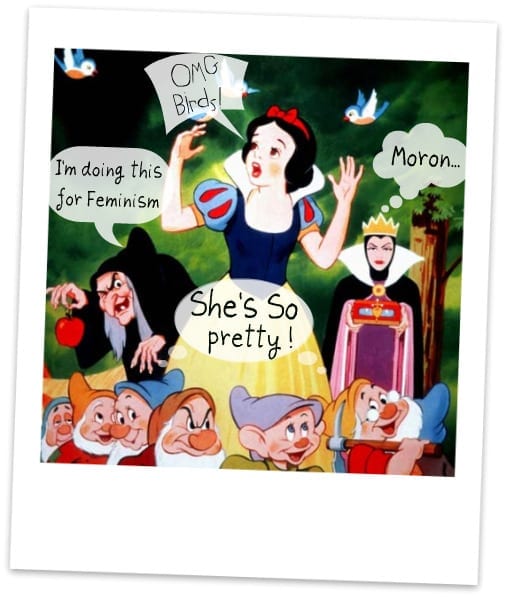 Okay, let’s start with Snow White herself. She’s pretty enough, and it’s nice to see a dark haired princess in the face of blondes everywhere. But, HOLY MOLY, is she dumb. She wanders around in the forest in her poofy sleeved dress giggling with the animals, and then somehow makes the amazing decision to go inside an empty cabin miles and miles away from everything with no one to hear her scream.

Then, when we think she can’t be any crazier… she decides the people living there MUST be children because they seem to be quite tiny–and instead of like getting help or whatever, she then proceeds to CLEAN THEIR HOUSE and make some dinner.

Yeah, because that’s what I’d do.

Then there are the dwarfs. What are they? Frat boys? Just a bunch of manly men hanging out in a shiny jewel mine all day long, and then they head back to their dirty house while singing a little ditty. Good thing Snow White was hot, or they might have kicked her out right there and then.

We can’t forget about the hero of the day, Prince Charming. Nothing like a man in tights to show up at the last minute and save the day.

But, there is a saving grace to this movie–The Queen. Her magic mirror tells her there’s someone prettier, and she isn’t having any of that. So, she does something about it. I kind of respect her for that, I mean–not the plans to kill Snow and put her heart in a box (Don’t even get me started on that inappropriate for child event) but, you know–the wanting something and going for it.

Disney doesn’t always get it wrong though, here are a couple of heroines I can get behind…

And of course, the girl who saves Hercules…

Today I want to know, What shows are totally ruined for you because you’re a writer?

*howls* Awesome post! I'm quite rabidly anti-princess with the notable exception of Belle, Ariel and Mulan. (Though the best Disney girl character IMHO is Lilo and that's because she's cracked and looks like my daughter but I digress.)

I'd say most fairy tales are ruined for me not so much because I'm a writer but because, wow, where's the logic. Let's just traipse into a strange house and eat strangers' porridge... that's a great idea Goldilocks. Really. .-= Michelle´s last blog ..Random Observation =-.

Ugh, I'll be the first to say it: the Twilight Saga movies were ruined for me because I am a writer.

Keep in mind, I saw the movie Twilight before I ever read the books. I loved it up to a point (just after Edward walks into the cafeteria for the first time, when I promptly melted in my seat and hubs had to give me CPR), and then I sat there alternating between loving and hating it for various writer-related reasons.

My daughter insists I watch the movies with her and engage in the whole Twilight thing (which I admit to enjoying somewhat), and even now, I sit and rip the characters apart (in a good, writerly way), comparing and asking "what if" questions.

Y'all analyze things WAY to much. I NEVER do that.

Mulan isn't a princess by birth, either. Her whole story was about knowing how to get things done. She and Belle are my favorites. I loved Meg, but I didn't like the romance with Hercules because he just didn't seem nearly smart enough for her. I knew she'd find him tiresome eventually. .-= Rosemary Clement-Moore´s last undefined ..If you register your site for free at =-.

@Rosemary Clement-Moore, I am so with you on the Meg thing. I feel like at some point she's going to feel guilty that he didn't go on ahead and go for the god thing... so now she's stuck with him.

Now her and Hades... that's a good match!

Isn't it so strange how differently things look as a parent (and as a writer). My son is in love with Tom and Jerry (so was I as a child) and it really is so violent by today's standards--LOL! .-= write-brained´s last blog ..Art PEE-ces =-.

@write-brained, ohmigosh! My daughter is in love with that show too, but holy crap you are so so SO right. It's horribly violent! Now I get that whole itchy and scratchy thing they do on the Simpsons!

I LOVE The Last Unicorn! Also The Black Cauldron and The Dark Crystal.

A while ago I was trying to find the narrative arc of my novel. I was discussing it with my husband, the super genius. Later on he was reading a story to our daughter and he turns to me and says, "This story has no narrative arc. None. It's all, "The hat is red. The mittens are blue. Lame." I laughed so hard! We're not the only ones ruined by writing. ;) .-= Mercedes´s last blog ..I WIN I WIN I WIN! So Here’s A Tattoo. =-.

I think I KNOW the story you're talking about.

Man, that is like the fourth time in three days someone has mentioned The Dark Crystal. I think I'm going to watch it later today.