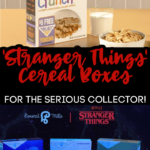 It’s an unexpected crossover with this partnership between Netflix and General Mills to create special boxes of cereal that are done in a ‘Stranger Things’ theme!

Are you excited for the fourth season of ‘Stranger Things’ which will finally return in the spring of 2022?

While you wait, you can taste the excitement with Cheerios, Cinnamon Toast Crunch, and Lucky Charms

The included cereals are Cheerios, Cinnamon Toast Crunch, and Lucky Charms, all come with their own ‘Stranger Things’ references.

With the Cheerios box, the logo has been made upside-down and the inside of the ‘o’ is shaped like a Demogorgon!

The box also has Russian writing and a “chance to win a $100 gift card to Starcourt Mall” which is the location as seen in the show where the KGB went to get to the ‘Upside Down’.

On this special box, the Leprechaun is holding the dice like the characters from the show use for the game.

There is also a nod to the Christmas lights that Joyce used to communicate with Will when he was missing.

Then, on the bottom of the box, there is a depiction of a free toy Wheeler van.

The upside-down is represented with the upside-down cereal bowl on the front of the box, and there is a smiling Demogorgon head added in with the graphics.

This box boasts an offer for tokens worth $5 for the Palace Arcade!

So this is just the front of the boxes, but these limited edition collectible boxes also have nods to the show all over them!

The fronts of the box open up like a book and there is a two-page spread of ‘Stranger Things’ activities.

One box even features a missing poster for Barb!

These are not your typical boxes of cereal and are definitely something for collectors.

You can only buy these ‘Stranger Things’ collectible cereal boxes from the Netflix online shop and each box sells for $19.86!