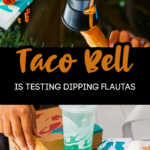 Taco Bell is revamping their once made to order rolled chicken tacos, remember those?

Shredded chicken stuffed in a deep fried crispy corn tortilla shell that often came with a dipping sauce of your choice.

Similar to the once loved rolled chicken taco, Taco Bell has decided to revamp the fan favorite menu item and make Dipping Flautas instead.

The difference? Out with the shredded chicken and in with seasoned beef, plus a flour tortilla instead of corn.

Available in pairs because two is always better than one when it comes to ordering Taco Bell, a selection of dipping sauces is your choice including Spicy Ranch, Nacho Cheese or Creamy Chipotle.

Now that you’re drooling, Taco Bell is only testing the new Crispy Dipping Flautas in Oklahoma City, Oklahoma which means the rest of us can only hope the snack becomes nationwide for all of us to try.