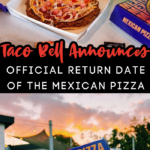 Taco Bell’s Mexican Pizza is proof that when people band together (including a few outcries on social media), any food item can return even when it’s promised to be taken away for good.

This year, Taco Bell is welcoming back the Mexican Pizza with open arms and our mouths are wide open!

So far we know that the Mexican Pizza will graciously make its return in a few months due to the outpouring of hearts that were not so silently broken; what we didn’t know was when that day would officially come, except now we do.

The scrumptious layered pizza stuffed with refried beans and beef, topped with a melted three cheese blend, pizza sauce, and chopped tomatoes will finally be in the hands of Taco Bell enthusiasts once again; just make sure to lick the cheese off your fingers when you’re finished.

Thanks to Taco Bell, the return date of the Mexican Pizza is finally, no longer a mystery!

According to the Bell, the historic return of the beloved meal will be added to menus once again on May 19, and you can even get it for free thanks to Taco Bell’s IOU for rewards members only who received a mystery reward on the app during the Big Game back when!

Including a vegetarian version for those who choose to opt out of beef, if you’re craving more than just the Mexican Pizza you can now select a combo that features two Crunchy Tacos, a large fountain drink and of course, the Mexican Pizza for a suggested price of $8.99.

That’s right, Taco Bell loyalty members can snag the pizza two days early; not to mention if you’re also a DashPass member, fans can enjoy $2 off one Mexican Pizza with a minimum subtotal of $12 with the promo code “MEXPIZZA” before checkout!

For those who crave the Mexican Pizza without having to leave their couch, Taco Bell plans to release its pizza through DoorDash starting May 19 until the 26.

After May 26, the Mexican Pizza will be made available on other delivery platforms beginning on May 27 of this year!

So while we wait for May’s flowers, Taco Bell’s Mexican Pizza will soon be stocked once again when we all notice the tulips sprouting and the birds chirping.

Expect drive thru-lines a mile long for the crispy pizza and remember, the early bird always gets the worm!