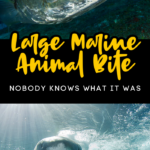 There was a shark attack called in this weekend to the Monroe County Sheriff’s office in Florida, but when the hurt teen was airlifted out of Key Largo, doctors weren’t so sure that it was indeed a shark that bit the boy.

The 15 year old was lobster fishing on his family boat off the coast, and he was standing in murky water.

The next thing he knew, a “large marine animal” had made a meal of his leg and thigh.

The bite was so severe that he had to be helped to shore, and airlifted to the hospital.

He didn’t see anything. The water was murky. Then it was bloody.

Whatever it was that attacked the boy bit his left calf, ankle, and also took a chunk out of his upper right thigh. Ouch, right?!?

Now, this is Florida we are talking about, so it could have been just about anything. The state is known for sharks, alligators, crocodiles, and even barracuda.

You couldn’t pay me enough to stand in murky Florida water! That just seems like a recipe for disaster — a tempting of the fates, if you will.

It could have been a barracuda or a shark. I don’t know. It’s unconfirmed.

Thank goodness, the teen was in stable condition after the incident, but he isn’t able to tell anyone what bit him.

To complicate this incident just a little bit more, Florida Fish and Wildlife Conservation Commision does not investigate shark bites, but they DO investigate bites by crocs and gators.

So, if it was a shark bite, another agency is supposed to investigate the issue.

BUT, nobody knows what kind of animal caused this vicious attack.

One thing’s for sure. WHATEVER it was is still out there, and I’m not about to go swimming in Florida waterways any time soon!