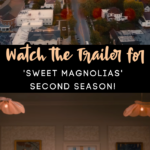 As we all know, Sweet Magnolias was already approved for season two while Netflix was also kind enough to recently throw us another bone, and announce the release for the ten episode series!

While we were told the show premiers again in February, a trailer has yet to be released… until now; which means we can finally have a few of our questions answered, especially regarding the scary cliffhanger season one left us with!

Since the last episode of season one, binge-watchers of the show were left on the edge of their seats since the tragic car crash on prom night occurred in the last few final moments of the tenth episode.

And if you don’t remember, the three soul sisters do not know who was involved in the car crash which means us fans were left wondering too.

What Does the Trailer Show for Sweet Magnolias’ Second Season?

Thanks to the recent trailer Netflix just released, we now know a few more details and what to expect in season two!

Addressing the biggest question in the room, we now know that Kyle, Maddie’s son took his brother’s car and while he looks a little banged up in the trailer, it doesn’t look like much more than a few scrapes and bruises, thank goodness!

It also looks Maddie, Dana Sue, and Helen are doing in particularly well in their love lives but of course, since this is a romance/drama series there’s no doubt that there may be a few obstacles to get over in each of their love interests and we are here for the steamy drama!

With a few other details I’ll leave up to you to watch, you can view the newest trailer for the second season of Sweet Magnolias, here.